With the decline of main street over the past decade, businesses are finding new and creative ways to utilise the many empty physical storefronts and office blocks in cities across the country.

Reasons Why Main Street is Dying

Whilst the success of online shopping coupled with rising overheads has led to main street stores shutting down across the world, the COVID-19 pandemic and working from home has accelerated the closure of many office spaces too.

“The high street is no longer fit for purpose – High streets are becoming less able to meet the needs of their community and businesses. It’s competing with an ever-evolving and fast-paced world to which it isn’t adequately adapting. It’s also no longer affordable and attractive for businesses to sustain themselves or their communities.” – Stephanie Edwards, Director and Co-Founder at Urban Symbiotics

In London alone, 18% of office space is unoccupied and even 2 years on from the start of the pandemic, 62% of people visit main street in the UK less often than they did before it began.

Not only this, but the more recent cost of living crisis that only seems to be worsening has meant a huge downturn in main street shoppers and more punters turning to the internet for cheaper deals.

What this all means is a lot of empty, unused space in city centres and the economic and social downfall of previously bustling hubs of activity.

“Some examples include the use of old supermarket premises as areas for pop-up screenings, youth sports areas, growing and greening programmes, Artist studios and exhibition spaces and community co-designed areas such as parks and specialist local markets. ” – Stephanie Edwards, Director and Co-Founder at Urban Symbiotics

From turning empty buildings into spaces that instead host private events, professional training and photo shoots to reusing them as gyms or storage spaces, utilising these spaces has had a positive impact on main streets and the people who frequent them.

Whether or not these places change their usage or remain empty, one excellent way to make the most of this shift in main street habits is to invest into empty building advertising. 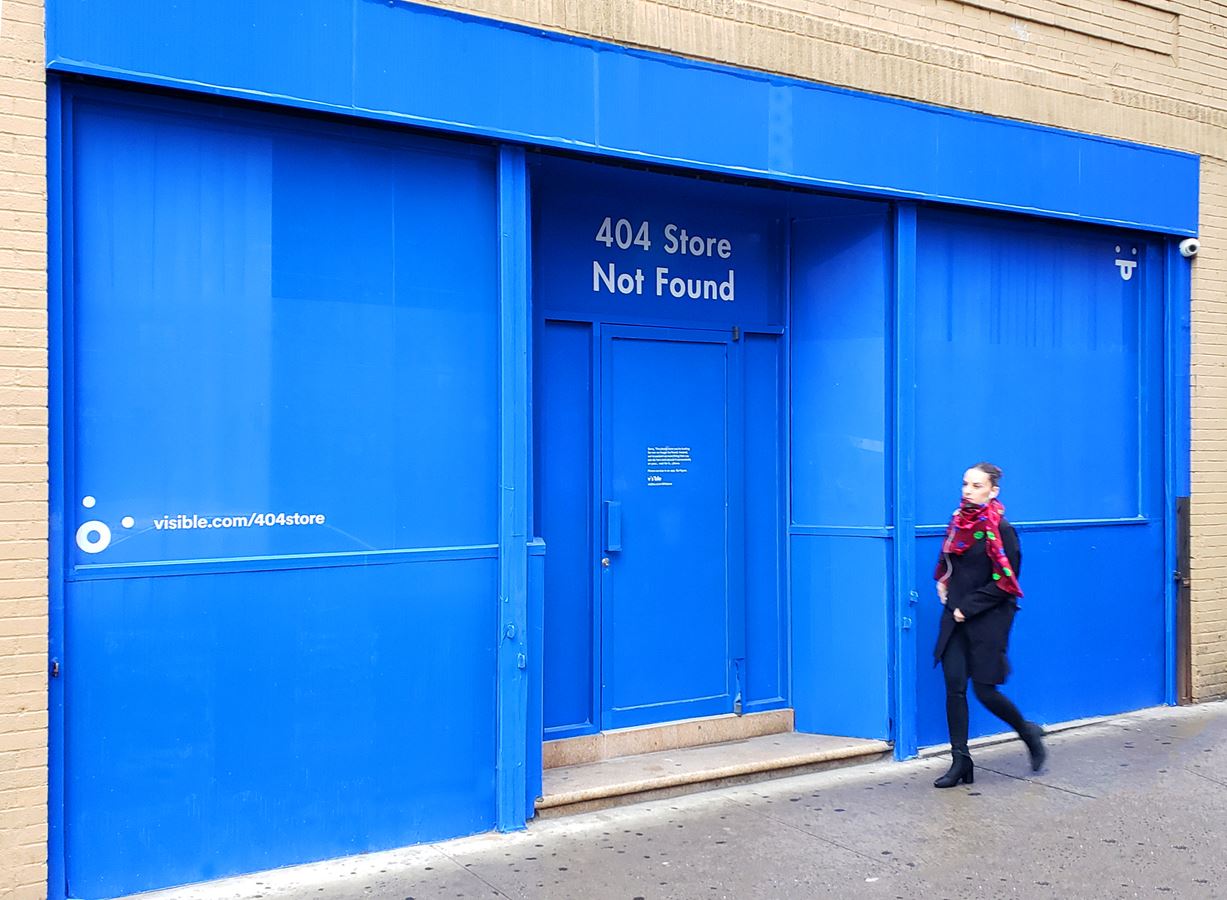 Take the clever ‘404 Store Not Found’ campaign by US cell phone service provider Visible for example. They have no physical presence on main street but this hasn’t stopped them from advertising in city centres by covering vacant retail units in striking blue window film and intriguing passers by with the simple message ‘404 Store Not Found’.

A reference to the error code when you reach a broken web page, the creative campaign also features a URL which takes users to a page on their site with the title: ‘404 Store: Frustrating phone service not found.’ This unique marketing ploy got a lot of media coverage and is a great example of empty office advertising.

However, it’s not just clever advertising campaigns like this that can benefit from using Perforated Window Film to enrich empty lots…

“Perforated Window Film doesn’t have to be used just for advertising. Why not use it to display art on empty windows to enrich people’s lives or print something related to the local history to engage the community, or perhaps graphics which give a positive vision of the future.” – Roger Hill, Contra Vision Ltd Managing Director 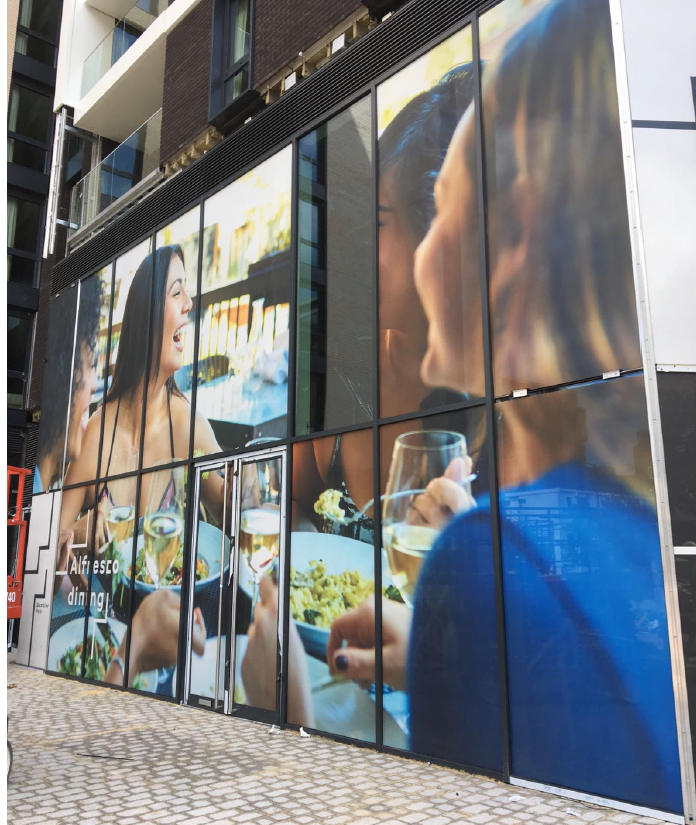 Wembley Park is an 85 acre neighbourhood in London which features office space, malls, gyms, restaurants bars, entertainment venues and much more. With over 7,000 new homes already built and plans for a total of over 20,000, the building site could have easily become an eyesore and blight on the local area.

However, by utilising Contra Vision® display graphics where internal building work was being done, not only was the construction site blocked from view to the general public, but it also provided a chance to showcase what the unit would be turned into as well as allowing natural light into the unit to aid the construction workers.

“By applying perforated window film to the windows of an empty retail unit it will drastically improve the main street and in turn, improve the state of mind of those who pass through. Wembley Park is a great example of this” – Roger Hill, Contra Vision Ltd Managing Director

The Future of Main Street

Whilst main street has certainly had a lot to contend with over the past decade, it has shown remarkable resilience and an ability to adapt to consumer behaviour patterns. Following a recent study by Deloitte, it’s their belief that ’The perceived weaknesses of the high street model’ are in fact strengths as they ‘lower the barriers to entry for new concepts and operators.’ The result? ‘a more flourishing and diverse environment on our local high streets.’

So whilst there have been losers in the decline of main street, such as chain stores which have decreased by 6% since the start of the pandemic, there are numerous winners too. The number of independent stores has actually increased and there has been a trend to shopping local, focusing on socialising and taking less trips but buying more which has had a positive eco friendly knock on effect.

And of course those that have seen the downturn of main street as an opportunity to showcase their brand through creative advertising. Have you been inspired to promote your brand via empty office advertising? Take a look at our Inspiration page for more information.