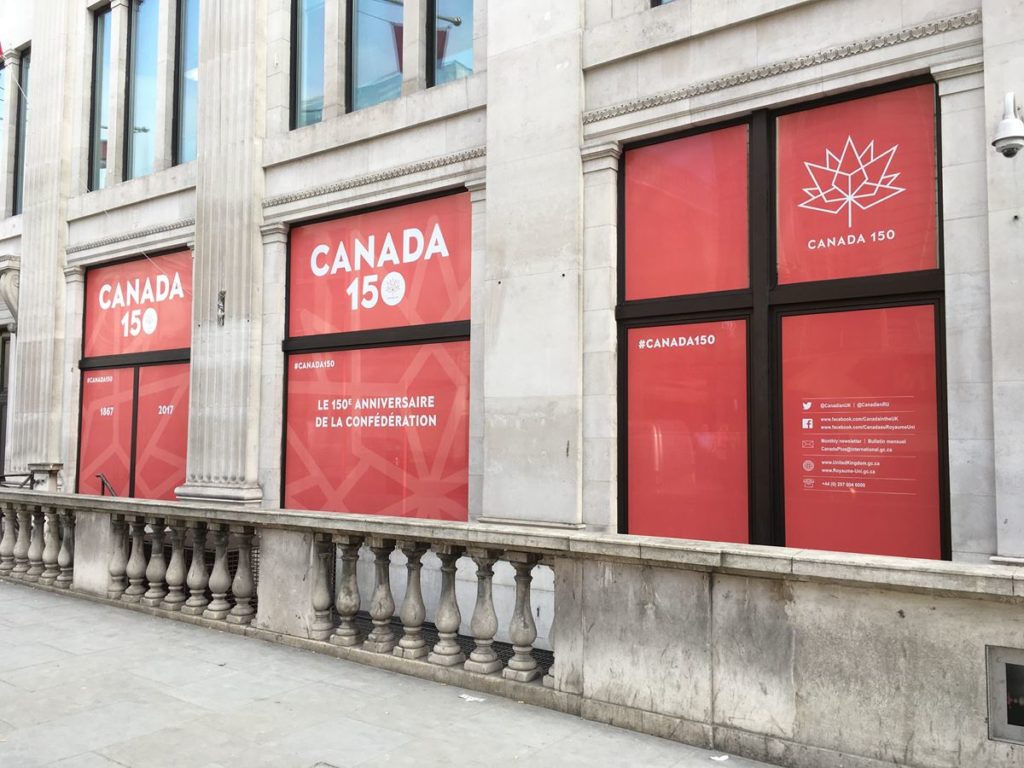 Canadian Confederation (Confédération Canadienne) was the process by which the British colonies of Canada, Nova Scotia, and New Brunswick were united into one Dominion of Canada on July 1, 1867. As 2017 marked 150 years of Canadian Confederation, there is significantly more build-up to this historic event so any promotional material applied to the building façade would be on display at the Canadian High Commission for several months.

The Embassy Communications Team at Canada house were tasked with marking the momentous occasion with an eye-catching installation at the UK High Commission Office, Canada House. The High Commission has large windows and occupies a commanding position on the edge of Trafalgar Square, one of London’s most visited tourist attractions and among the city’s busiest road junctions.

The communications team had three key objectives in selecting the best approach to this application: first, to commemorate the anniversary’s date, second to promote the anniversary toward London’s international audience in an engaging way and finally to protect the internal working environment at the High Commission from any disruption or interference caused by the communications campaign.

The task of printing the Contra Vision® graphics for the High Commission fell to Somerset based With Print. No stranger to high quality print, With Print is among the region’s best equipped and creative design-led print producers and the company has an impressive clientele.

With Print, felt that Campaign White on Black in 30% transparency was the best material for the promotional graphics. The material is known to work well with the hardware With Print would use to produce the print.

Internally, the unique characteristics of Contra Vision® meant there would be no negative impact on the graphics or impediments to the valuable view out to Trafalgar Square. Once the celebrations are complete the Contra Vision® material would remove cleanly and easily.