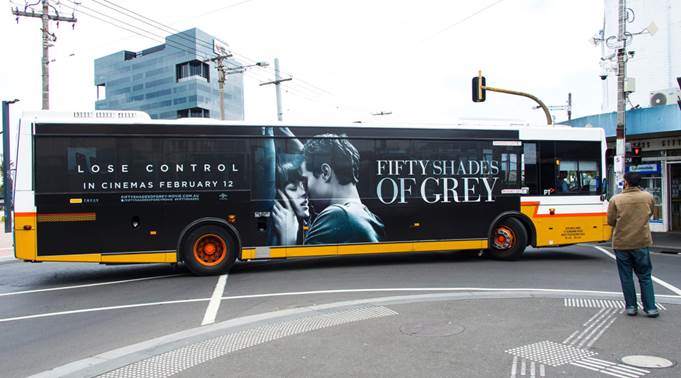 Back in 2015 the much-anticipated Fifty Shades of Grey film was released, accompanied by record breaking advertising activity worldwide. Even with a heady mix of advertising firsts and digital media innovations, it was reassuring to see a prominent role for outdoor media, as this Contra Vision® Megaside from APNO in Australia, demonstrates. Collectively the pre-launch hype appears to have achieved the highest number of advance bookings since the final instalment of Harry Potter.

The printability and the see-through nature of Contra Vision® Perforated Window Film allows for window graphics to seamlessly tie in with the graphics applied to the solid areas of the APNO Megaside. Window graphics like this can be very effective at creating impact and generating response as a bus is essentially a mobile billboard.

The classification of the film as over 18 in most countries, the well-known subject matter and adult themes contained within the film would potentially make it an unusual fit for a public media platform like out-of-home advertising. However, it seems that in this case the juxtaposition of the two created the desired response.

As part of the promotional campaign, Universal Pictures used a comprehensive mix of communication platforms to generate as much awareness as possible among the much sought-after target audience group: affluent women.  The anticipated commercial value of the film was so powerful that big brands worldwide looked to capitalize on the expected success. It is therefore no surprise that the film managed to entice Calvin Klein Jeans to the UK cinema screens for the first time.