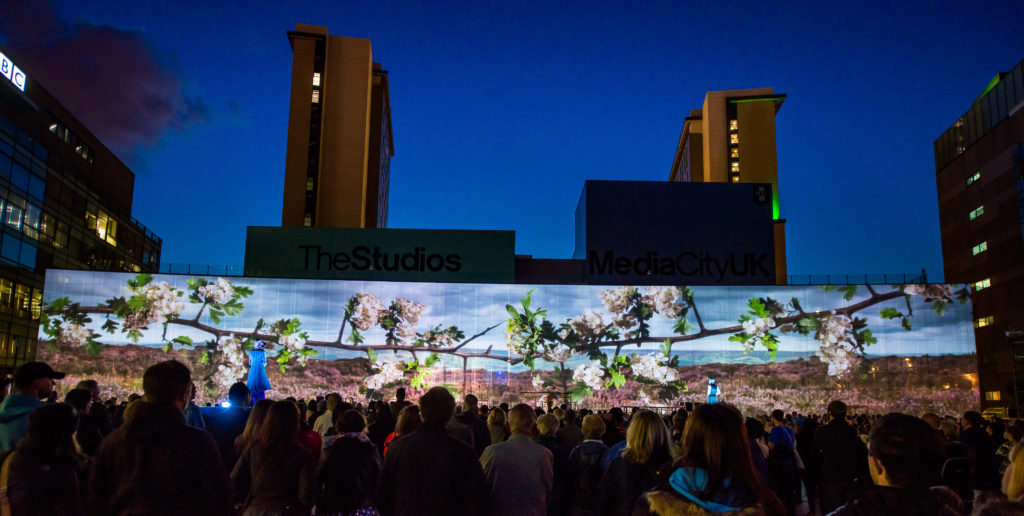 On Saturday 2nd August 2014, an extraordinary event took place at MediaCityUK. HONOUR is an outdoor event inspired by WW1 poets and the memories of men and women from the North West affected by the conflict of 1913 to 1918.

For the event to have the desired impact, images depicting the experience of war such as men signing up to join the war and living in damp trenches needed to be projected onto a big screen as a backdrop for the stage.

The Creative Place was assigned the task of designing a suitable surface to facilitate this and they planned to turn the BBC building into a giant project screen using one-way vision window film. The brief was complicated by the need to have the projection visible both on the outside and the inside of the building from a single projection point. Performance Translucent White in 30% transparency was the ideal solution.

The centerpiece was an emotionally-charged performance by a ‘Super Choir’ of hundreds of amateur singers, who performed a specially written piece by acclaimed composer Andy Smith and conducted by renowned Choral Director, Jeff Borradaile. Choirs from across the region and individual volunteers assembled to perform the largest outdoor event of its kind this year.

Contra Vision advised the design agency on the ideal product for this application. In this instance they selected Performance Translucent White perforated window film to transform the MediaCity buildings into a giant projection screen with images visible from both inside and outside the building.

Artists including Creative Director, Craig Morrison, German duo Hartung Trenz and Wales-based animator Sean Vicary were invited to use projected text and carefully curated imagery to tell the story in a way which engaged people of all ages and provided a communal reflection on the 100th anniversary of the outbreak of World War One.