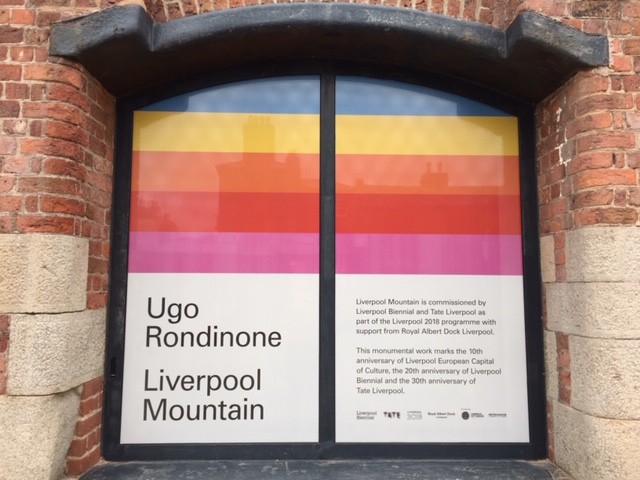 In 2018, the Tate Gallery in Liverpool, UK were unveiling “Liverpool Mountain” which is Swiss-artist Ugo Rondinone’s first public artwork in the UK and the first of its kind in Europe. The 10-metre high sculpture is inspired by naturally occurring pyramids of rock, known as Hoodoos, and the art of meditative rock balancing.

For the last few years, the Tate Liverpool has chosen to use the Contra Vision® HD™ range on its perimeter windows to promote exhibitions and other messages. As one of the most respected galleries in the world, image quality is of paramount importance and HD was up to the job.

To promote Ugo Rondinone’s sculpture, which stands within Mermaid Courtyard on the Royal Albert Dock, they used Contra Vision Performance HD™ White on Black which is a 40% transparency film featuring micro-perforations, creating the most vibrant graphics and the smoothest see-through on the market.

The detail shown in these close-up photos really demonstrates how small you can go when printing fine detail and text, with everything staying clearly legible which is not possible with standard definition films.

This breakthrough micro-perforated window film also delivers the sharpest and most vibrant window graphics thanks to 1mm diameter holes which are 60% smaller in area than standard one-way vision window films. This meant that Tate Liverpool’s promotional graphics stood out in a competitive retail environment.